Setup KDE Wallet for Use with SSH Keys

Ksshaskpass is a front-end for ssh-add which stores the password of the ssh key in KWallet.

It was already installed in my case on Kubuntu 18.10, but otherwise install from your package manager or preferred source.

Again from the ksshaskpass README:

make sure to set the SSH_ASKPASS environment variable to the path of ksshaskpass and then call ssh-add from your autostart scripts.

Based on a bit of reading, it appears that .config/autostart-scripts/ is a reasonable place to install the following script:

If you have additional keys (other than the default id_rsa, etc.), specify them by updating the last line of the script like so:

Save the script, make it executable, and run it for the first time:

If all went well (and one or more of your keys requires a passphrase) you should be met with the following dialog: 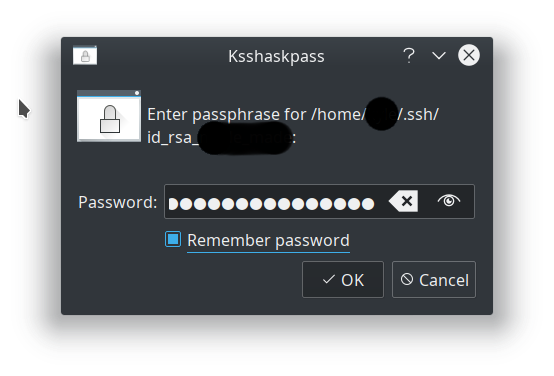